I traveled to China to report on Foxconn and Shenzhen as part of a special feature for Wired magazine, which will be published in an upcoming issue. In the meantime, here's a glimpse of some of the things I saw in Shenzhen.
Foxconn's factory in Shenzhen, China, is home to about half its 420,000 workers. They make many of our gadgets and computers, then walk to dormitories on the 2.1-kilometer-square campus. I got to look inside. 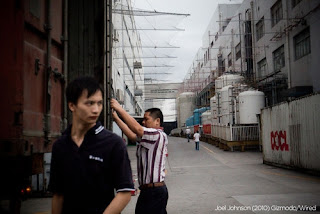 This dorm is one of the older ones on campus, built near the beginning. It's a men's dorm — women have separate facilities — and populated mostly by entry-level workers. 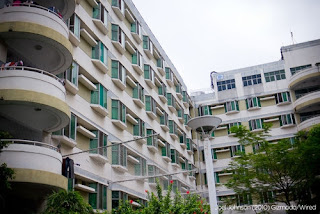 In this dorm room, eight workers sleep in four bunk beds in a room about the size of a two-car garage. 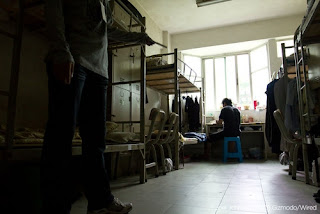 Toiletries are kept on a shelf in mugs. 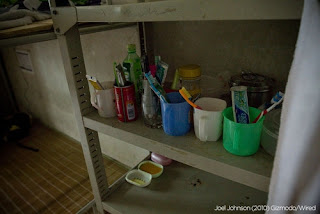 Hallways remain institutionally empty, kept dim to save energy, keep the temperature down and to allow workers who keep a late schedule to sleep with less interruption during the daylight hours. 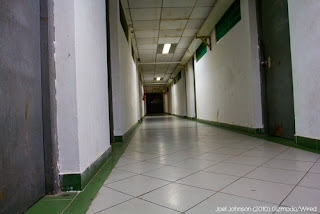 A television viewing room is available on each floor. I joked with the Foxconn executive who was with me that of all the places in the world that could probably manage to get bigger TV screens installed, it was probably here at Foxconn, who make televisions for the world's largest brands. 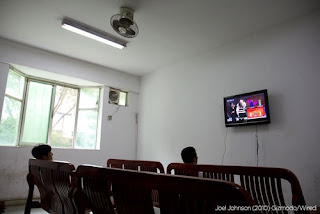 Since a spate of 11 suicides earlier this year, every building on the Foxconn campus is draped in netting. It is morbid, but seemingly effective: There have been no suicides since the nets were installed in May. 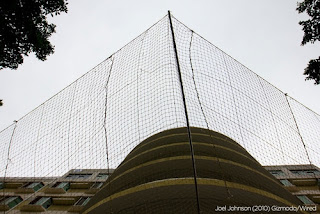 Workout equipment is located in the spaces between buildings. 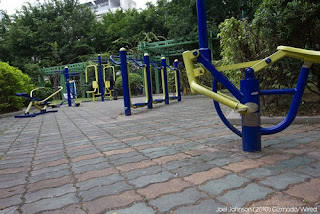 Newer dorm rooms share a sink on the balcony, where workers can wash their clothing and themselves. Management of the living quarters has recently been outsourced to a local operations company in an attempt to address concerns about employers overseeing living conditions of its workers. It's unclear how outside management will fundamentally alter the nature of on-campus living. 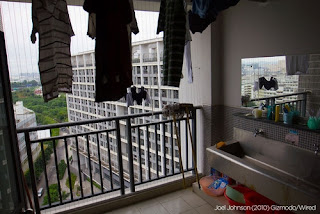